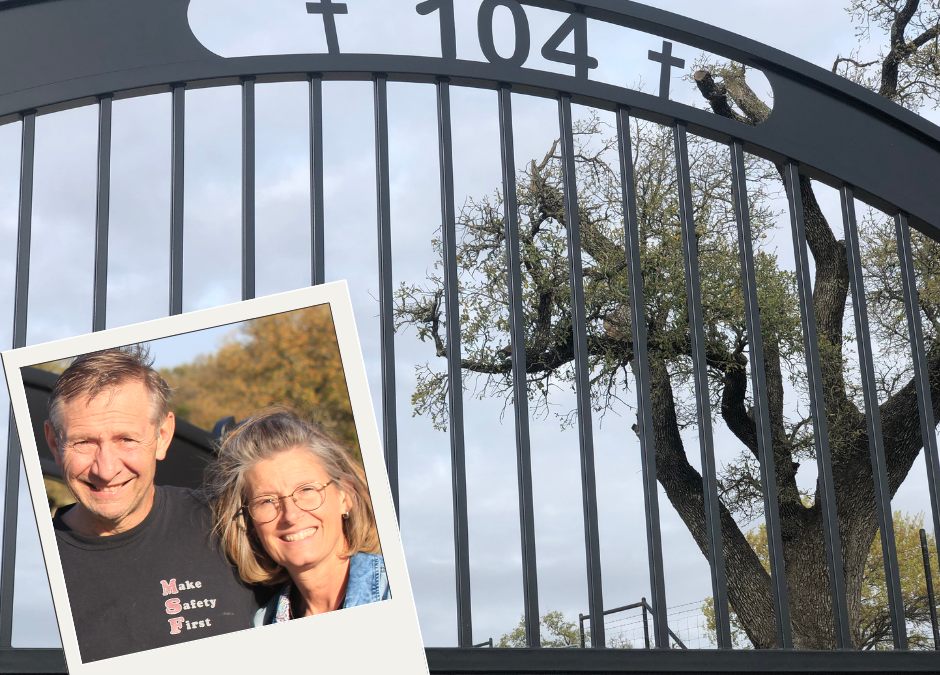 When I returned Melinda Tunnell’s initial call for a gate, her voicemail sweetly said in a West Texas accent, “I’m either in the garden, chasing grand-kids or reading my Bible.”

As we got to know her through the process of building her gate, we found that message summed her up pretty well.

Upon finishing her project, I met up with Melinda and her husband, J.C., to take pictures of their new gate.  While I was three, we reminisced about our initial meeting and the whole process.

She initially called because she was impressed with our reviews and noted there were a lot of long-time clients that came back to us years later for more projects.  However, she wasn’t sold yet.  She still wanted to meet in person.

“I’d wanted a gate for a long time and been saving for it. I finally wore down J.C.,” she told me with a heavy accent on the way she says “Jaaay Cayee”. (Jeffery always got a big kick out of the way she said J.C. and would frequently mimic it when we were discussing their job.)

My favorite part of my interview with her was when she said, “I could tell Jeffery wasn’t a BS-er. He looked me in the eye when he talked to me. A lot of men don’t know how to do that,” said Melinda.

With a pained look on his face, J.C. said, “Don’t you mean to say Jeffery was a genuine person.”

“No. I want to say he is not a BS-er because I don’t like to be placated. I want people to be real with me. I respect that,” she respectfully retorted. “I wanted someone that could explain things without talking down to me.”

I told her we were grateful to them for being patient with us.  Because she came to us at a very busy time, she had to wait a while for us to get started on her project.

She said that as a hairdresser, she has had some experience dealing with clients, and “I just knew it would be like when I get someone in my chair.  They get my full attention at that point. I knew I would get Jeffery’s when the time came.”

We finally did get to focus on their project.  And when we came over to set the posts for the gate, we had quite a crowd.  Several of the gran-kids were there to help. 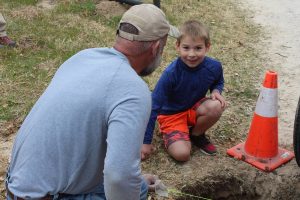 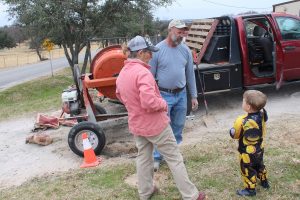 Sterling Tunnell, aka the “Bumble Bee Transformer”, explained the game plan to Jeffery and Melinda.

The Tunnells have a total of seven gran-kids (four girls and three boys) that all live next door so their house is always alive with plenty of activity. However, in a year or so, their son and his four kiddos will be moving to Argentina where they have been called to missionary work.

“We will miss them all terribly, but I know God has a plan for them and I trust each one to His loving care,” Melinda said.

J.C. told a great story about how he and Melinda’s journey together started in Midland.  “I had to go with a buddy to his grandmother’s house. Melinda was there. I got my buddy to set us up,” he recalled.  “But she was only 14, so I had to wait til she’d graduated.  That was in May.  We were married right after that on June 28, 1980.”

After farming in Midland for about 10 years, the Tunnells moved to the Fort Worth area so J.C. could build airplanes for LTV and Melinda could cut hair.

That is what they still do, but about 5 years ago, Melinda and their son-in-law wanted to get out to the country.  They found the place they live now.  J.C. said, “We worked up a contract for it, but our realtor never submitted it to the seller.”

That sounded like something to get irritated about to me, but he went on to explain how God had a hand in the deal.  “The place went into bankruptcy.  We ended up buying it on the courthouse steps for $1 more than the bank was willing to pay.  It ended up being HALF of what we were going to pay,” he told me with a big smile on his face.

After that, their son and his family moved into the apartment on the place while their daughter’s family built behind them.

“God blessed us with this place.  I feel a responsibility to make the most of it,” said Melinda. That is why she has big plans for expanding her gardening projects.

Right now, she has a four-seasons garden that is mostly for their own use.  She said she started this because “J.C. has had some health issues that have to do with the acidic versus alkaline foods we were eating.”

Melinda explained to me that when you shop in grocery stores you can buy whatever you want all year round.  That translates into buying acidic foods all the time because that is what we like to eat most. If you stick with a four-seasons garden, you will eat the higher alkaline foods in the winter (like collard greens, Brussel sprouts, etc.) and the higher acidic foods in the summer.

“That is a more balanced diet and how God intended us to eat,” she said.

The four-seasons garden is just the beginning of Melinda’s gardening vision. “I need to get the roof on my high tunnel so I can do more,” Melinda said.

Therefore, Melinda is hoping to form some relationships with local restaurants as well as possibly marketing seasonal produce boxes on social media. “But I really have to get that roof on first.”

I had no idea about the breadth of knowledge Melinda has about gardening.  I hope to have a few plants someday. Now I know an expert to call.

Have you met the Tunnells? If so, tell me about any fun stories you have with them. Or, what do you think of their new gate?

Get your FREE 3-step guide

to kickstart inspiration for your dream gate.

for an ordinary gate and refuse our FREE help, close this pop up.

You are on your way to your dream gate!

We hate spam and will never abuse your information.